Oh, it’s that magical time of year again when I dive deep into my memory banks to relive the books that I’ve loved best this past year. Those of you playing along at home will know that each year, I keep a running diary of the books I read, and at the end of the year, I compile my favourites into a blog post to share my unsolicited opinions on what I’ve read.

And now, onto the current year! As of today, December 11 2018, I’ve read less books than previous years. I’m currently at 65.5 books inhaled and devoured, which includes almost three weeks of no reading during our California adventure.* Even so, trying to narrow down a top ten out of so many fabulous reads isn’t easy, and as always, I have a mix of fiction and non-fiction/biz books in my list. Except for numero uno, they’re not in top 10 order because, quite frankly, it was hard enough to find ten amongst the gold. The main criteria, especially for the non-fiction/business/PD books is that they make an impact on my life in some way, either with something I can action and implement, or by way of inspo. Some are here because of the sheer excellence of the way words have been weaved. I’ve included the direct links to Booktopia but of course I have no affiliation with them, I just want you to be able to get them quickly and easily!

Another caveat- I’m a writer, so I read as a writer. It’s really hard for me to ignore shitty syntax and crappy grammar.

Let’s get our Word Nerd Book Wormery on, shall we?

1- What happened? by Hillary Rodham Clinton

This book was incredible- not just the best book of my year, but right up there with the best books I’ve ever read. It was bloody hard to read in terms of the sheer frustration of the content, and it put me in a bad mood for a good two weeks. It was beautifully written, insightful, scathing and so, so clever. I gave my mum a copy and I’ll be giving my daughters their own copies as well to read and be inspired by. At the same time I was reading What Happened?  I saw one of those nauseating Instagram hustle posts that said something like ‘If you’re not working for yourself, you’re making money for someone else.’ I wrote a snarky comment asking what about teachers, health workers, policy makers, people dedicated to serving the broader community, and then hit unfollow. What Happened? is not just a memoir of a truly horrid time in history but it’s a call to action for all of us to focus on something bigger than ourselves. Loved it.

2- Into the Forest by Jean Hegland

This was a beautiful book about two teenage sisters who live with their family out of town. When society breaks down, they’re geographically removed from the chaos, until they’re not. It was gripping, poetically written and actually quite harrowing in it’s frightening ability to come true, not unlike The Handmaid’s Tale which I also reread most years. I loved it!

3- Option B by Sheryl Sandberg

Sheryl quite clearly has lived our worst nightmare- written after the sudden death of her husband, this is a book that weaves her personal story with theory about facing adversity and building resilience and the steps she takes to support her family to find joy in the aftermath of such heartbreak. Sheryl is a fantastic writer and after reading Option B, I reread Lean In, another freaking good read from a few years ago which is filled with amazing one-liners that can keep a Word Nerd’s social media strategy fed for years, as well as inspire and confirm my business and life philosophy.

4- The Good People by Hannah Kent

I really loved this novel set in Ireland in the 1800s and the superstitions and beliefs of the characters, people living in borderline poverty. My grandmother, my Nonna, had some seriously messed up superstitions that made no sense to anyone but her, but even she had her limits. This gave me an insight into where they would have originated.

5- The Trauma Cleaner by Sarah Krasnostein

This memoir was recommended to me by someone in one of my Writer’s Toolkit Workshops earlier this year after I told my story about how I moved from Registered Nurse to Word Nerd (thanks Jen!). Thankfully, nothing I came across in my nursing career was like the scenarios played out in this book which I read in less than 24 hours. It was harrowing, distressing, gobsmacking and in many ways inspiring. How can you fail to be inspired by someone who is raised violence, neglect and poverty, who has a gender reassignment in a time when it wasn’t even really a ‘thing’ (not my words), who moved from prostitute to trophy wife, then launches a wildly successful business cleaning trauma scenes and hoarders’ homes? Sarah, the author, shares Sandra’s story in such a beautiful way- she actually won the Premier’s Literary Award for this piece, amongst other awards. It’s a tricky read, though, just from the descriptions of the scenes of the homes to be cleaned, so if you’re slightly squeamish, give it a miss. The violence is distressing too.

6- Girl in the Woods by Aspen Matis

A memoir similar to Wild by Cheryl Strayed (in my top 10 in 2015), Girl in the Woods is another tale of a woman solo tackling the Pacific Crest Trail in an attempt to out-walk her demons and craft herself a new life. I read this in one night, sitting up way past idiot-o’clock, willing this young woman on her journey. It was sad and exhilarating and so evocatively written. I just wanted to hug Aspen; instead, I recommend you read her book.

7- The Miracle Morning by Hal Enrod

I read this in January during the long blissful days of summer after having it recommended to me more times than I count, and always with the comment ‘Oh, but you get up early anyway!’ Yes, I do get up early, 5.30am in fact but my morning routine is basically looking at my phone whilst putting on my sneakers to be at the gym at 6am. The Miracle Morning prescribes a little bit more love and care to the routine to up level your day, your business and your life. It’s six steps that are easy to implement, but may require a wake up time of 5am, which I’m not 100% on board for. Eleven months later, I’m still thinking about actioning some of Hal’s steps, but can I see myself repeating affirmations at 5am? Computer says no… it’s a fun, easy read though- go for it!

8- The Lost Flowers of Alice Hart by Holly Ringland

This novel reminded me of my favourite book of all time (kinda), The God of Small Things, particularly the early chapters where the protagonist was a child and has that view of the world. It was gorgeous, poetic, about the links between women, the stories we tell ourselves as children, the perspectives that may not be real but influence how we live our lives as adults. Pure beauty!

9- Butterfly on a Pin by Alannah Hill

This was such a surprise to me. Alannah Hill is an incredible writer, first of all, and secondly, she completely busted any preconceptions I had about her. I knew her reputation as quirky and driven but I had no idea that her business success was underpinned by a lifetime of abuse. It was raw, it was sad, it was funny in places, but man, the strength it must have taken her just to put one foot in front of the other some days. It shows you that ‘success’ can be all smoke and mirrors, especially in the business world which can be pretty much built on illusion.

10- Our House by Louise Candlish

This was a highly relatable read about how quickly and easily things can escalate. A man attempts to fix one stupid mistake by another stupid mistake and another and another. I read this one quickly wanting to know the what and the how, and I really enjoyed it.

Here’s some more reads that could have made my list:

The Songlines by Bruce Chatwin

We are all Completely Beside Ourselves by Karen Joy Fowler

The Invention of Wings by Sue Monk Kidd

Tell me, what’s your favourite read of the past year?

*The reading absence happened accidentally and it’s the longest I’ve ever EVER gone without reading a novel or twelve, and boy did I miss it! Like banking up sleep over a long weekend- or like I used to pre-cherubs- I plan on making up for it big time over the summer. In fact, the aforementioned cherubs may need to use a broom handle to get a reaction out of me. 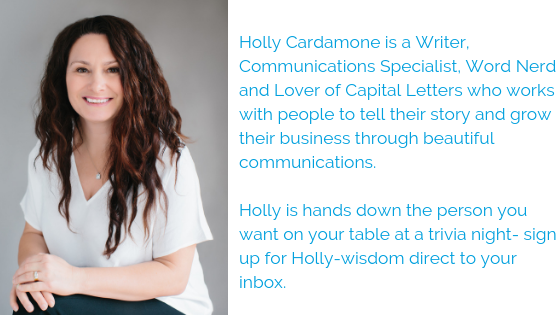