You can’t fake originality or creativity- or can you?

About ten years ago, I was in the regional library in the country town near where I grew up, and there was a display set up celebrating a local elderly gentleman who had been offered an honorary Bachelor degree off the back of a local history he had written. I flicked through his book, and a chapter caught my eye. It was the story of a local lifesaving club, and word for word, sub header by sub header the content was mine, written as part of my Year 12 History assignment. You see, in Year 12, in the olden days, we had an exam and one major written assignment that was over six months in the making. At my school, students selected a local landmark, organisation or person and wrote a fairly substantial research-based book. The school then organised for them to be published (by published, I mean typed up with an actual typewriter, then photocopied and stapled together) and copies were given to all the local historical societies and libraries. Fifteen plus years later, I stood in a library and saw someone had copied my work, word for badly overwritten word, and I felt sick to my stomach. My dad, my number one fan, was furious, and actually pulled out my copy of my assignment which was less than a metre away from the display in the local history section, and showed the librarian. She pulled a face, and then pulled down the display.

I had reason to recall this recently when I found a post on social media by another business owner, taking one of my strategic processes and claiming it as their own. Here’s the kicker- this person isn’t a communications specialist or a writer for business, but are marketing themselves as something similar, and it’s the third time this specific person has lifted my work. They’re not alone though- there’s a person based in NSW who takes my memes and slaps their logo on them within days of my posting them, and another based in Brisbane who turns my blog post images and content into social media posts.

Was it Shakespeare who said imitation is the highest form of flattery? I’m not flattered- I’m pissed off.

I invested heavily in my skills and knowledge- I have not one, but two Masters representing close to a decade of study and education. By ‘education’ I don’t mean the ‘learnings’ that come from listening to a podcast or reading a business book or a business celebrity autobiography, I’m talking peer-reviewed, research-based, rigorous theoretical and practical study.

I don’t call myself a communications specialist and writer for business because it’s something I have a knack for- I own my expertise because I have the qualifications and the years of experience to show for it. Two of my campaigns are taught as tertiary communications case studies at Australian universities, and over my two decades in the game I’ve worked with many, many people and organisations to tell their story and to grow their business with beautiful communications. I haven’t done so by ‘winging it’- I wouldn’t put people’s livelihoods at risk by faking it until I make it- I’ve done it via hard work, by commitment and by basically knowing my shit.

I love the Internet- I love how it’s democratised information and gives people a platform. Of course, there’s a dark side to this, and I wrote my Master’s thesis about it. Anyone with a Canva account and $100 to spend on Facebook ads can market themselves as anything they want, substance or not. Scratch the surface of some of your favourite Instagram accounts and you’ll realise pretty quickly there’s not a lot there. That’s the worst thing about small business land- there are unscrupulous people who think it’s perfectly ok to steal from other people and to pretend to be something they’re not. My silver lining in this situation- someone can pretend to be me, can take my original ideas and copy and try to pass it off as their own, but they’ll come undone.  They have an expiry date, and I’ll continue to create, my focus firmly in my own lane.

Tell me, have you ever found your work copied or had someone take credit for your IP? 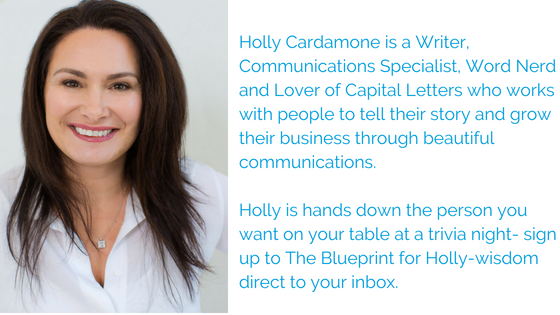